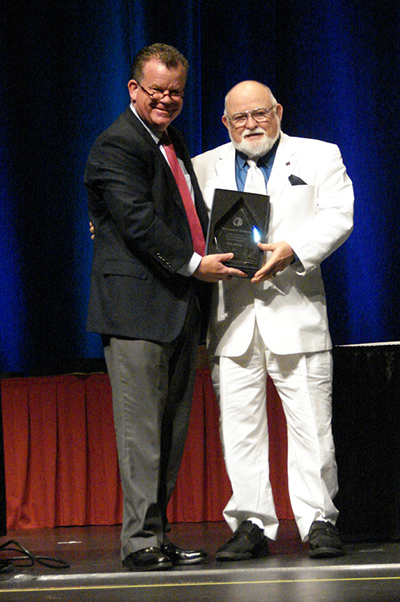 Bill Habern, the attorney who established the first full-time, full-service corrections law firm in Texas, is heading to the hall of fame.

Habern, who opened his own law office in Huntsville in 1975, will be inducted into the Texas Criminal Defense Lawyers Association’s Hall of Fame on Friday in San Antonio. The induction ceremony is part of the 29th Annual Rusty Duncan Advanced Criminal Law Course, named for the late Judge M. P. “Rusty” Duncan of the Texas Court of Criminal Appeals. The course runs through Saturday at the Henry B. Gonzalez Convention Center in San Antonio.

Habern is a criminal lawyer specializing in parole, prison and post-conviction issues. He has written and lectured extensively on those topics. Habern was among the first group of lawyers employed as a public defender in a fledgling program in which attorneys represent indigent inmates in Texas prisons.

Habern received his undergraduate degree from Midwestern State University and his law degree from the Texas Tech School of Law. He is currently “of counsel” to the firm of Habern, O’Neil & Pawgan, LLP.

Habern has published more than 20 articles and seminar papers involving topics of parole, prison and sentencing. He has been a regular lecturer at over 100 seminars, and has served as an expert witness in both state and federal issues dealing with prison civil rights, parole issues and attorney ethics matters.

The Rusty Duncan Advanced Criminal Law Course is the premier seminar for the Texas Criminal Defense Lawyers Association and is generally acknowledged as the top criminal law course in the nation, with more than 800 criminal defense practitioners from around the state in attendance.

The TCDLA is the largest statewide association of criminal defense lawyers in the country, as well as being the oldest — now celebrating 45 years defending individual freedoms.

Habern’s full-service corrections law firm specialized in sentencing, prison, parole and post-conviction issues. He became a licensed attorney after graduation from the Texas Tech Law School in 1972. He was among the first group of lawyers employed as public defenders in a then new public defender program representing indigent inmates at the Texas prison. He remained in that program for approximately two years.

In 1975, Habern opened a law office in Huntsville, where he had a general law practice with emphasis on prison and criminal law. He continued to practice in Huntsville until 1979 when he was appointed executive director of the Texas Criminal Defense Lawyers Project, which is the continuing educational arm of the Texas Criminal Defense Lawyers Association (TCDLA).

In his early years, Habern served as lead counsel in civil rights actions against the Texas prison, the Texas Parole Board, and against educational institutions. His litigation included the nationally publicized “Ultimate Hunt” case, which resulted in a damage award for two prison inmates who were seriously injured when forced to act as “dog bait” for the training of Texas prison chase hounds used to track inmates that escape.

Habern also filed a civil rights action against the Texas Parole institutions for returning a certain class of parolees back to prison without giving them a due process hearing as required by the constitution. The filing of this civil rights action caused the parole agency to amend its procedure and hearings were re-instituted. Habern challenged the parole board’s policy of temporarily terminating parental rights of a parolee convicted of a sex offense who was no threat to his own children without first granting them a due process hearing. The parole board settled the case rather than deal with what the court might have ordered, and the client was awarded fully unfettered access to his parental rights.

In 2012, Habern received what he considers one of his most cherished honors. Each year the Houston Lawyers Association presents the Matthew Plummer Justice Award to a lawyer or law firm who has demonstrated a commitment to equal justice for all people. Plummer was a lawyer and civil rights activist during the early 1950s in Harris County. He later became well-known as Mohammad Ali’s lawyer during Ali’s famous draft resistance case tried in federal court in Houston. He was the first black district judge appointed to sit in Harris County.

The Plummer award was the result of civil rights litigation instituted by Habern and co-counsel and friend Richard Gladden, who filed in a series of cases challenging the policy of the Texas Parole Board which had caused the imposing sex offender conditions on parolees who had never in their criminal history suffered a sex conviction. This stigmatization was being done without benefit of the constitutionally required due process hearing required by the federal courts. The outcome of this litigation caused the removal of the stigma of sex offender conditions from hundreds of inmates who should have never been stigmatized by the label “sex offender” in the first place.

From 2013, Habern has continually been named as one of the 5 percent of Texas lawyers identified as a Texas Super lawyer. This list is published annually in the Texas Monthly magazine. 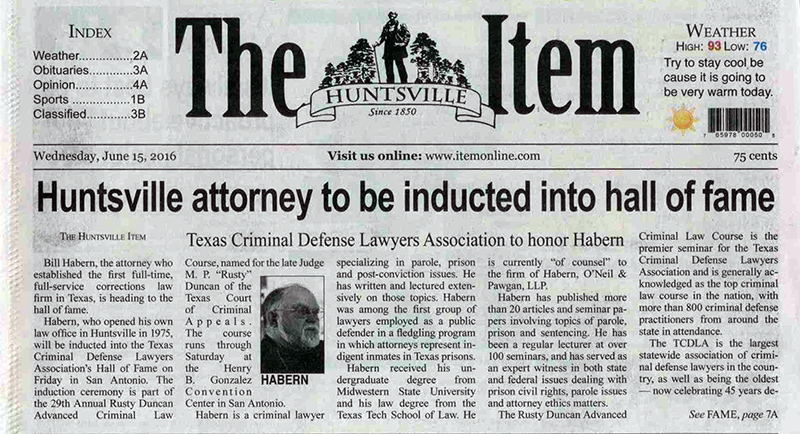